The mission of the Center for Chicano-Boricua Studies (CBS) is to transform the University, and ultimately society, by providing equitable access to a quality university education to students interested in U.S. Latina/o and Latin American cultural studies while enhancing diversity on campus. Now celebrating its 40th Anniversary, CBS accomplishes its mission through an integrated four-part program including:
1) Comprehensive Student Services and Academic Success Programs,
2) Research on U.S. Latina/o and Latin American Culture,
3) Internal University Advocacy on Latina/o Issues, and
4) Outreach and Service to Broader Communities.

CBS participants largely outperform their WSU First Time in Any College (FTIAC) peers in all areas of measured student success. CBS SEP participants passed English 1010 at a rate of 94% during their first fall semester, passed Math 0993 at a rate of 80% during the same semester, were retained at a rate of 86% and persisted into the following semester at a rate of 91%. This is compared to WSU success rates of 71% in English 1010, 44% in Math 0993, an 89% retention rate and a 75% fall-to-fall persistence rate for 2008 FTIACs. Despite enrolling students with lower average high school grade point averages and ACT scores, CBS Scholars generally outperform their WSU FTIAC peers. 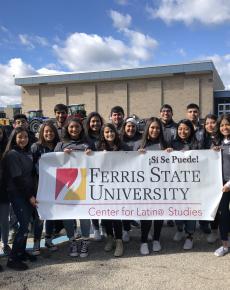