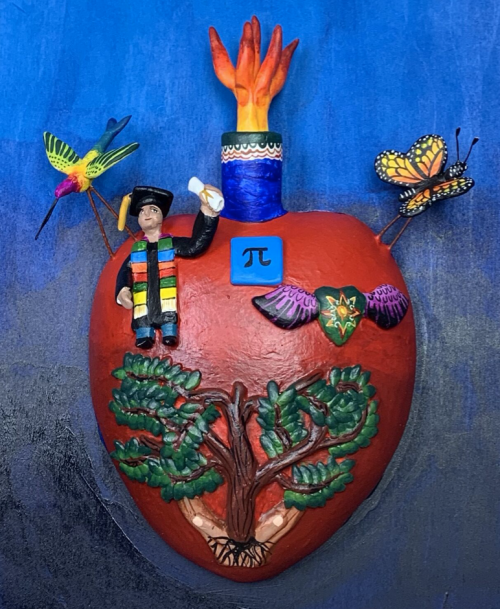 Diana Natalicio, was President Emerita University of Texas at El Paso and a Senior Fellow at Excelencia in Education.

Excelencia honors and gives its Heart to Diana Natalicio who was President Emeritus of the University of Texas at El Paso. A nationally respected, academic leader and administrator, Diana was one of Excelencia’s early, vital and vocal supporters. As president of UTEP, she understood how her support would help Excelencia achieve its mission to inform, lead and accelerate Latino student success. She agreed to collaborate with UTEP serving as the fiscal manager for Fund for the Improvement of Post-Secondary Education (FIPSE) partnership with Excelencia even before the organization officially launched in 2004. The FIPSE grant and UTEP partnership made it possible for Excelencia to release its inaugural publication, Latino Student Success at Hispanic-Serving Institutions: Findings from a Demonstration Project. This landmark policy report was hailed as groundbreaking for its content and established our credibility as a new organization. The report, which she actively contributed to, was also ground zero to the important work Excelencia has led since then focused on HSIs and all U.S. institutions’ opportunity to better SERVE Latino students.

Over the years she had been a partner and supporter and recognized Excelencia’s work as part of UTEP’s 100 during its Centennial Celebration. She remained directly involved and gave Excelencia access to her team as projects and strategies developed and to collaborate in hosting or speaking at convenings and institutes. What began as an affinity of purpose, led to clarity about leadership and the role of colleges and universities and now a commitment to make common cause going forward. Diana Natalicio’s life and career showed Excelencia founders and the country that you can achieve access and excellence while serving a community. Excelencia is proud to honor Diana Natalicio for having personified the impact of visionary leadership for accelerating Latino student success in higher education.